The general availability of DHIS-to-RapidPro was announced in the DHIS 2.39 release. Funded by UNICEF, DHIS-to-RapidPro provides connectivity between DHIS2 and an open-source workflow engine geared towards mobile-based services called RapidPro.

We are excited to share the news of our first successful DHIS-to-RapidPro pilot in Zimbabwe for the Village Health Worker (VHW) program. Zimbabwe’s Ministry of Health and Child Care (MoHCC) uses DHIS2 nationally to collect health data, and for disease surveillance. MoHCC's VHW program is "focused on disease prevention and providing community care at the primary level in rural and peri-urban wards, where village health workers serve as a key link from the community to the formal health system". In collaboration with HISP Uganda and HISP Zimbabwe, HISP Centre assisted the MoHCC in deploying and configuring DHIS-to-RapidPro to allow mobile texts of VHWs received in RapidPro to be delivered to DHIS2 in the form of monthly aggregate reports (i.e., data value sets):

In RapidPro, a contact sends a keyword from a mobile device over a channel, such as an SMS, that initiates a user-designed process in RapidPro called a flow. The initiated flow controls the sequence of mobile interactions with the contact and steps within the flow go from parsing the contact’s responses to capturing the results in flow variables. Let us walk you through our journey of installing DHIS-to-RapidPro for Zimbabwe’s MoHCC.

We began the roll out by downloading the latest DHIS-to-RapidPro executable JAR from the releases page of the GitHub repository and moving it to a directory within a dedicated linux system container from where we wanted to run it. The executable requires no local dependencies other than Java 11 being installed on the operating system. DHIS-to-RapidPro is also shipped as a WAR so the user has the possibility to deploy the application in a web container like Tomcat.

The executable was launched from the system container’s shell with the following command:

Without any arguments, the process terminated giving the following error:

We went ahead and set the rapidpro.api.url which pointed to RapidPro’s API along with the API token required for RapidPro authentication which was obtained from the RapidPro organisation workspace settings:

Notice how the secret token used to access RapidPro was exported to an environment variable. For security reasons, secrets are not permitted in arguments passed to dhis2rapidpro.jar. We will see later on that you can place arguments and secrets in a config file read from dhis2rapidpro.jar.

On the second run, we obtained another fatal error:

It was time to turn our attention to configuring access to DHIS2. DHIS-to-RapidPro supports two modes of authentication for DHIS2: basic or personal access token authentication (PAT). PAT was selected because it is considered more secure. We created a DHIS2 user dedicated to DHIS-to-RapidPro and generated a PAT from the user’s profile page that can GET and POST DHIS2 resources: 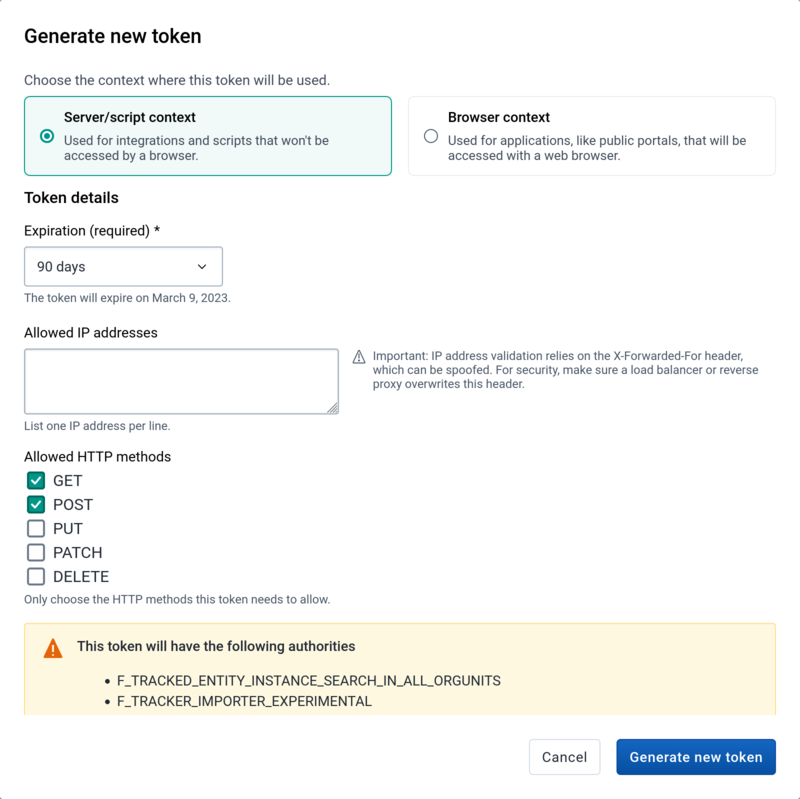 It is worth highlighting that the user was given permission to the organisation units (i.e., the villages) DHIS-to-RapidPro will be transmitting reports for.

The PAT, like the RapidPro API token, was exported to an environment variable while the dhis2.api.url argument was set to the Web API address of the MoHCC's DHIS2 instance:

Third time's the charm and the application printed the banner saying it is operational along with the URLs to reach its various ancillary services:

The ancillary services are available over HTTPS but, for the pilot, we decided to disable TLS given that this instance of DHIS-to-RapidPro sat behind a reverse proxy server that terminated the client’s TLS connection:

TLS should only be turned off under the right circumstances since turning it off can pose a security risk.

What made this integration challenging was the spotty network connectivity between RapidPro and DHIS-to-RapidPro. DHIS-to-RapidPro can ingest reports through a HTTP(S) endpoint which RapidPro hooks into. Webhook messaging typically scales better than polling, however, this approach is susceptible to reports being lost should RapidPro experience consecutive network or peer failures when attempting to post the message. To overcome this, we configured DHIS-to-RapidPro to scan every so often for completed flow runs in RapidPro rather than having RapidPro push reports via webhook calls to DHIS-to-RapidPro:

The argument to focus on is rapidpro.flow.uuids. The application will scan for flow runs that belong to the flow definition f23c4129-872b-464f-a1a2-afa89cdd9b82 as referenced in this argument. The flow definition ID was copied from the browser address bar while on the RapidPro flow’s designer page:

Successfully completed flow runs are transformed into data value sets and pushed into DHIS2. Any hiccups in the network communication between RapidPro and DHIS-to-RapidPro only interrupts the latter from ingesting the report rather than losing the report itself. 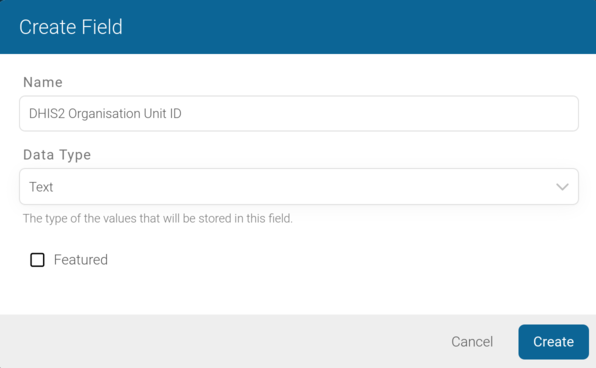 Within the configuration page of the contact under test, this field was set to the identifier of an organisation unit that has access to the relevant data set: 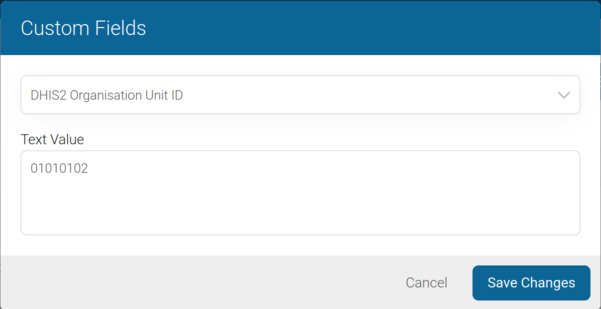 DHIS-to-RapidPro was now able to obtain the contact’s DHIS2 organisation unit, but it also needed to identify the data set that the report belongs to and map the SMS data points to the DHIS2 data elements. Accomplishing this necessitated the team tweaking the RapidPro flow definition in order for the:

For the first tweak, the data set code to be relayed to DHIS-to-RapidPro was hard coded inside a flow result named data_set_code: 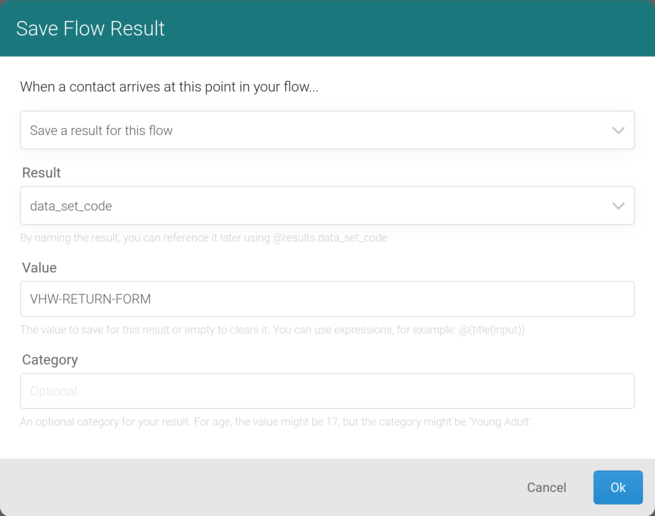 As shown above, VHW-RETURN-FORM is the code of the data set that the contacts will be completing. In the second configuration change, we gave each DHIS2 data element in the reported data set a code, making sure that the code did not have special characters that are considered illegal in RapidPro:

We then set these codes in the RapidPro result names capturing contact responses: 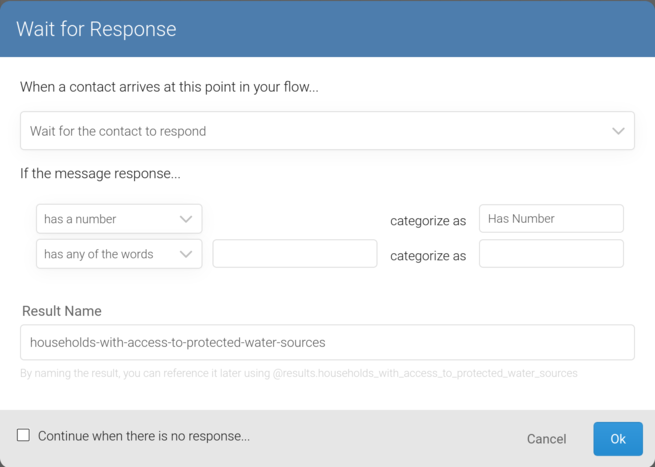 Let us take a step back and understand what happens under the covers when DHIS-to-RapidPro is started. The application will scan RapidPro for completed flow runs between intervals as defined in the cron expression scan.reports.schedule.expression config property which defaults to every 30 minutes. Ingested flow runs are pushed into an internal persistent queue for asynchronous processing. A worker then:

DHIS-to-RapidPro will retry to upload the data value set a couple of times should an intermittent error like a network timeout occur before giving up and saving it into a dead letter channel. The dead letter channel is a relational table where each row with the column status value of ERROR represents a report that failed to be uploaded to DHIS2.

The system operator can view the dead letter channel from the DHIS-to-RapidPro database web console:

Issuing the following SQL statement will instruct DHIS-to-RapidPro to replay the failed reports:

Speaking of web consoles, another web console the operator will find handy is the Hawtio console. From Hawtio, we can stop and start routes, comb through the application logs, view the number of reports transmitted to DHIS2, and much more: 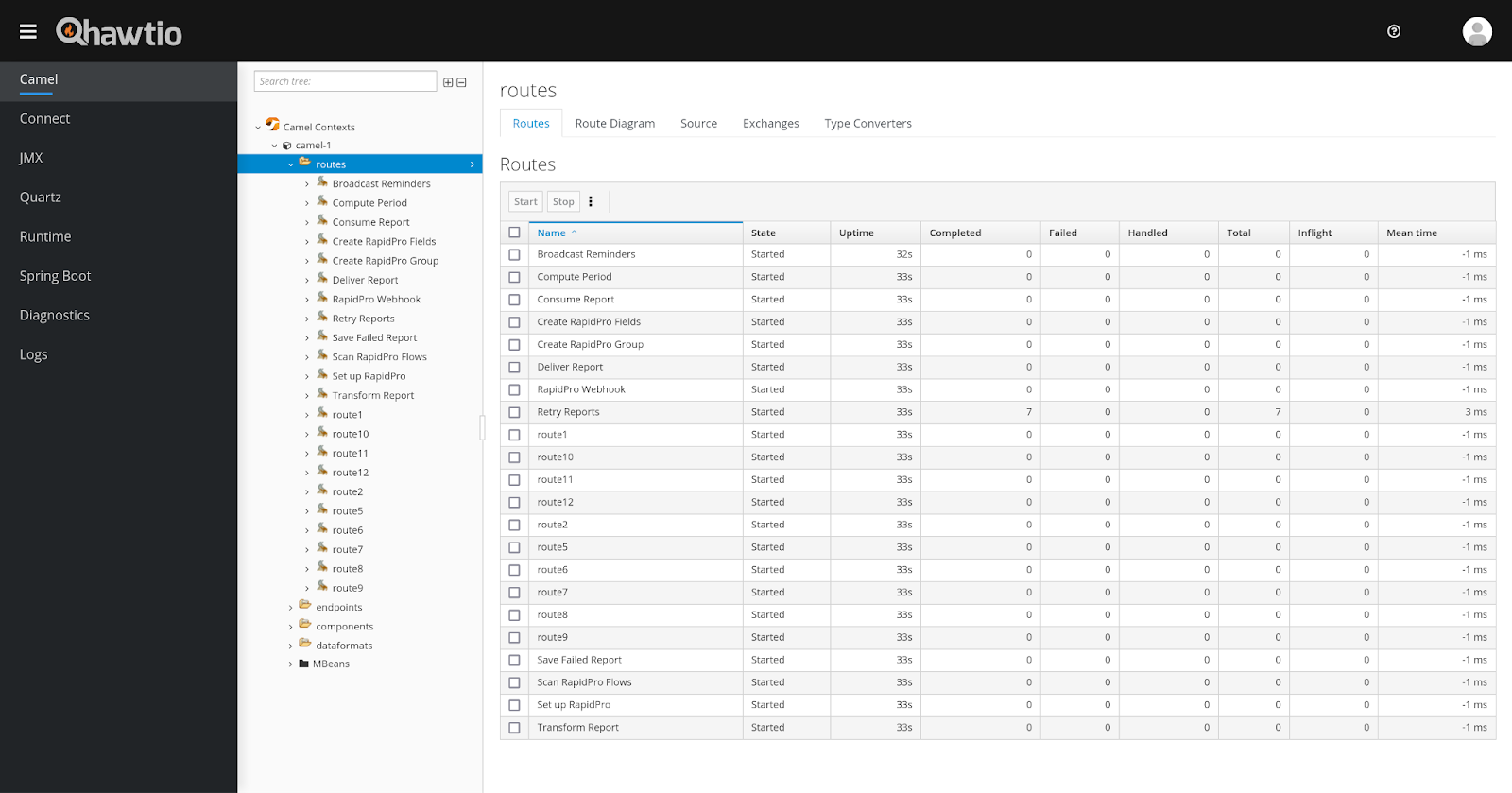 Check out the documentation to learn more about the management web consoles.

Plenty of documentation exists online on how to go about installing a systemd service but it is a recommended practice to have a service manager keeping an eye on the running application.

A pilot run was conducted by sending a fake SMS report from a cell phone number, which was consequently captured in a RapidPro flow run. We then ran the following curl command from the DHIS-to-RapidPro system container terminal:

If you recall, the above URL was shown in the application’s banner during startup. An empty HTTP request sent to this URL manually kicks off a flow scan from DHIS-to-RapidPro. As a side note, we could have waited for the scheduled flow scan job to kick in.

After a few seconds waiting impatiently, we headed over to the DHIS2 data entry app where we navigated to the data set under test for the previous month. To the team’s delight, there waiting for us, was the completed data set as sent from the fake SMS report:

We have only covered a fraction of DHIS-to-RapidPro’s capabilities. Visit the code repository’s README to learn more about what DHIS-to-RapidPro can do for you. At the DHIS2 Community of Practice, we are eager to learn about your experiences integrating DHIS2 with RapidPro and how their interoperability can be made better.