The last year has seen some significant changes to how the build system operates and this post will walk through the technical aspects of the system. The release and development processes which drive the build system is out of scope for this post and subsequently left out.

There are a few moving pieces, so let's get started! 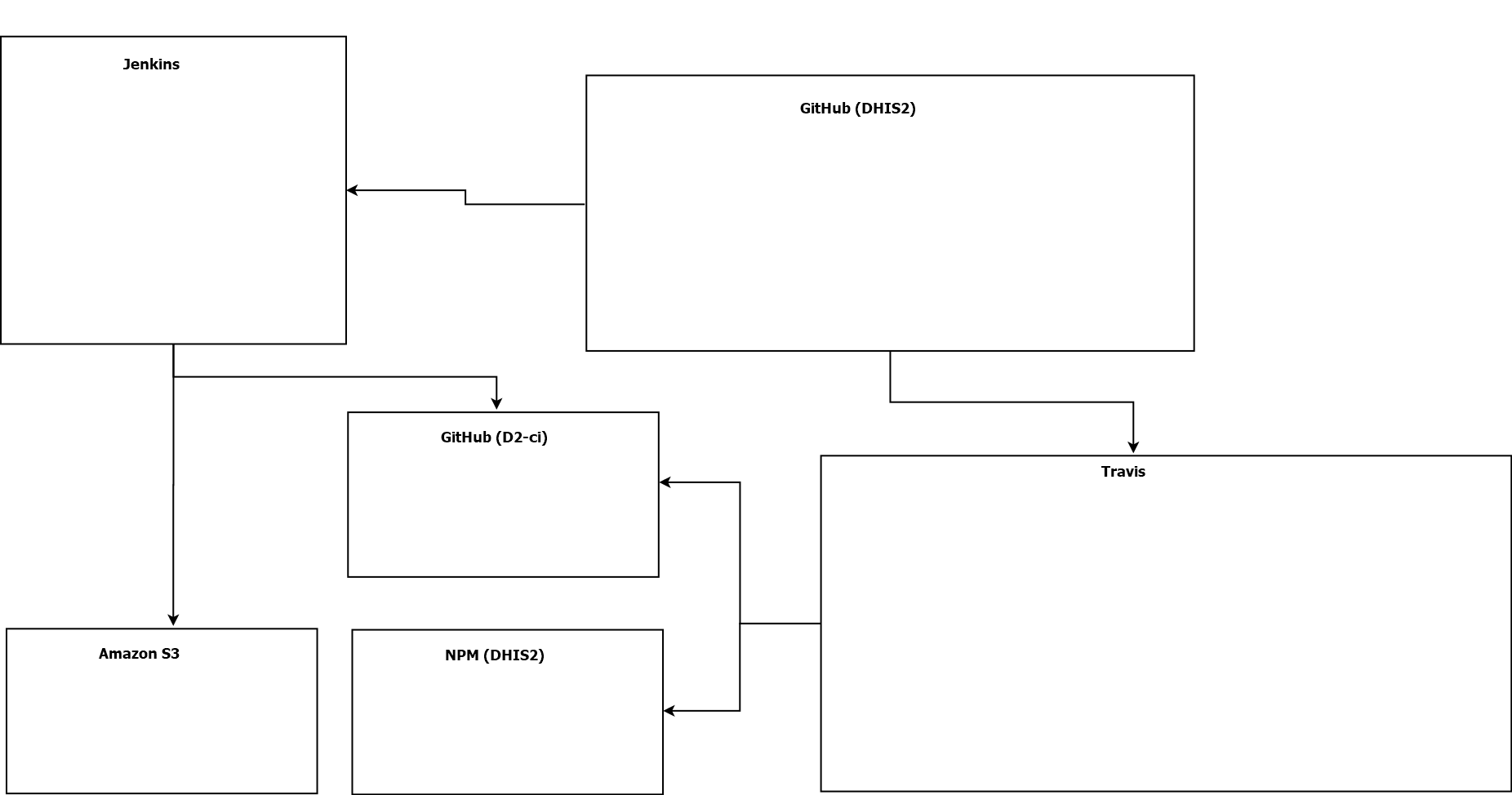 This is a diagram of the services and their links which make up the system. For now focus on the containers and let us walk through each system's responsibility.

Let's walk through the responsibilities of each service (container) in the above diagram.

DHIS2 has two organisations on GitHub, dhis2 and d2-ci.

dhis2 is where our source code repositories for the DHIS2 core, front-end apps and libraries live, in a neighbourhood much like any other on GitHub, The source code is here, PRs are done here, etc.

Having the artifacts in Git allows us to do other interesting things. Read on.

We use Travis to run a series of tasks on a source repository (App, Lib and Core). These tasks are described in a recipe, which is contained in the .travis.yml configuration file in each source repository. Together with what to do, and how to do it, the recipe defines what environment it should do so with.

A recipe typically contains steps that verify (with automated tests and other verifcation measures) and build the library or front-end app. The tasks will vary slightly for the core and the front-end applications and libraries.

We use Jenkins to verify, build, and deploy DHIS2 core. Much like Travis does for the front-end apps/libs, it follows a recipe that describes the what to do, how to do it, and what environment to do it in.

We use a S3 bucket as an artifact repository for core build artifacts.

NPM is where the front-end libraries are published and made available for apps that want to use them.

The lifecycle of a commit#

Now that we have a clear idea of what each service is responsible for, we can trace the path a commit takes through the build system for a given App, Lib, or the Core.

Given a code change in any of those types, it all starts as a commit on the machine it was made on. The system at this point is idle.

When the commit is pushed to the DHIS2 source repository on GitHub, the interaction between the GitHub and Travis services is triggered. 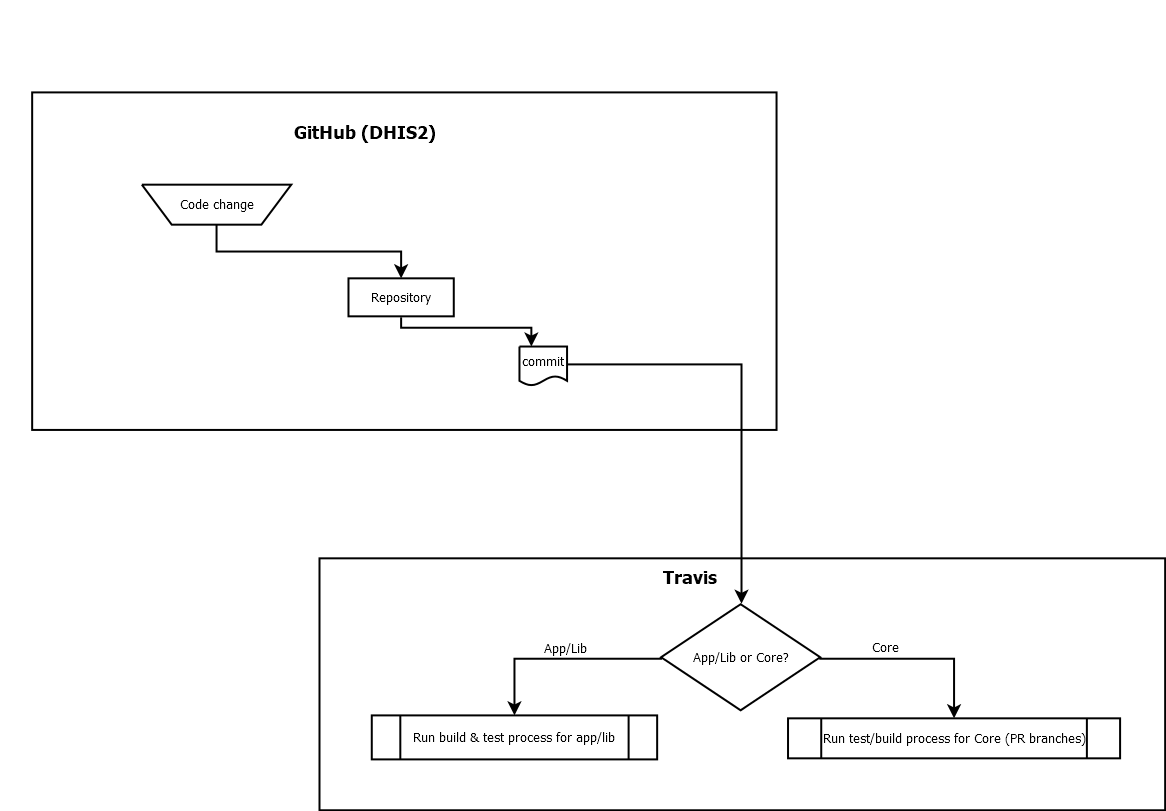 Travis follows the recipe described in the repository's .travis.yml file. This recipe will vary depending on the end product: App, Lib, or the Core.

The Core recipe describes task to verify, test and build the code in a PR to indicate whether or not the PR is good to merge. Only the result, success or failure, is used. This result will be manually reviewd by the developer before merging the PR to the master branch. 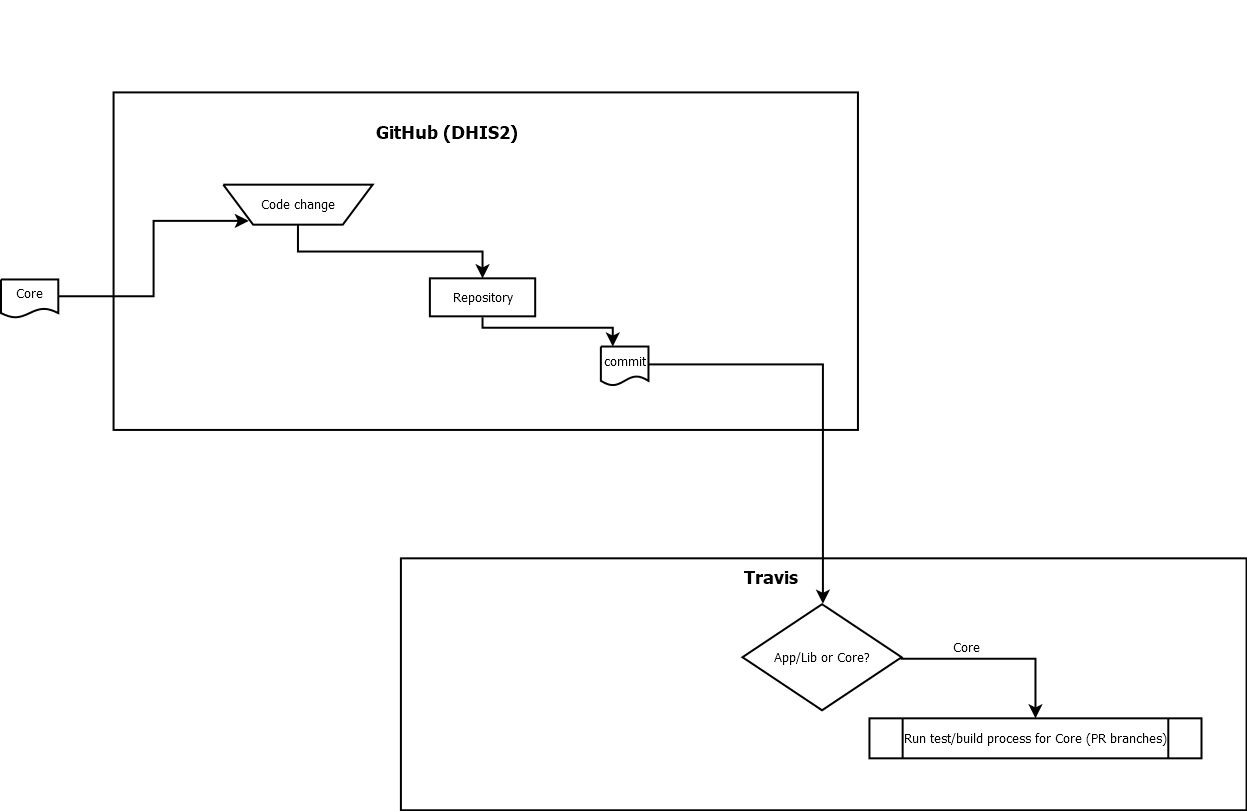 The App recipe is used by Travis on each commit, regardless of branch, tag, or whether the commit is attached to a PR. The app recipe includes the following steps: 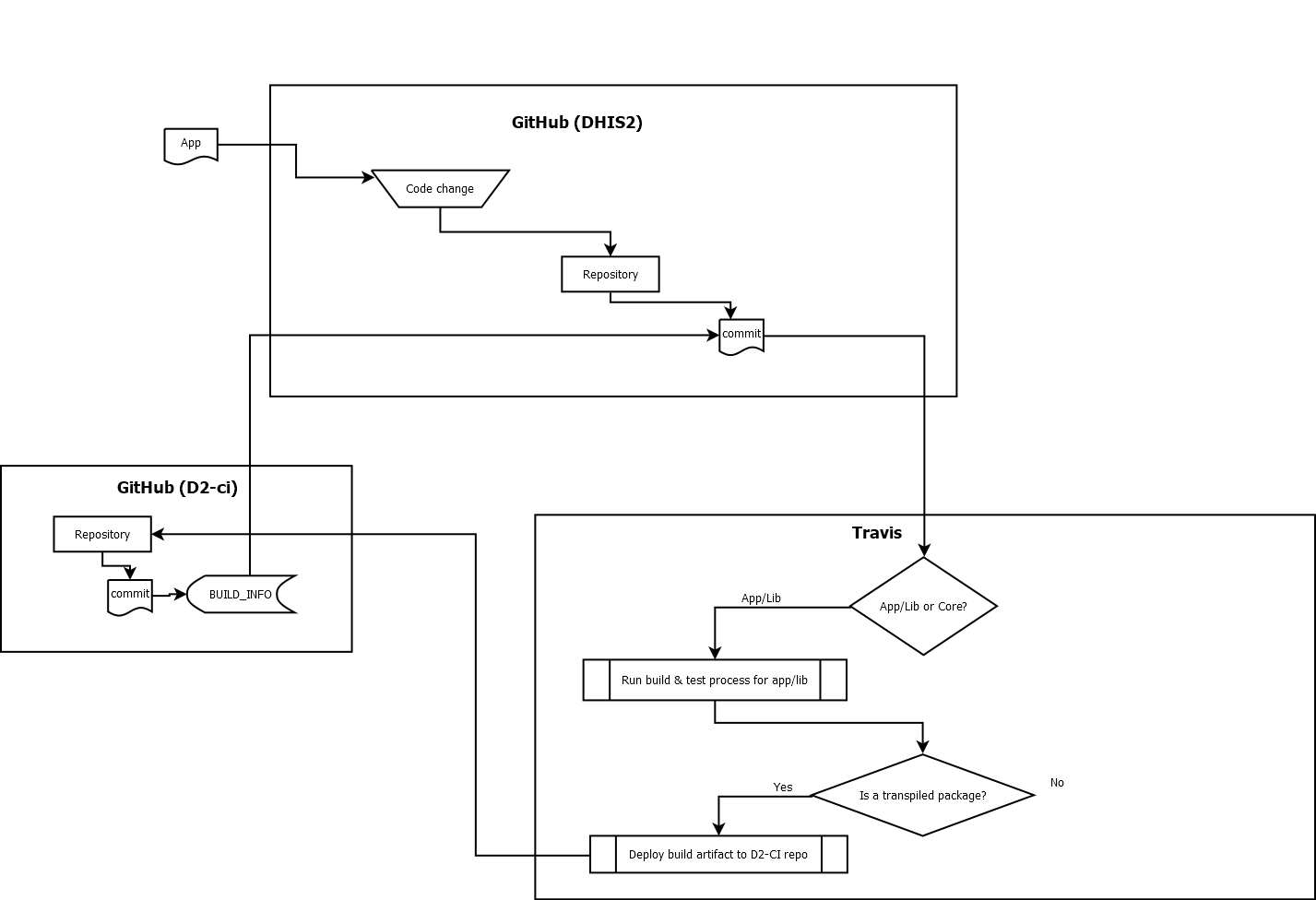 In step #4, if a tag is pushed to the source repository, it runs the final publish-build script, which publishes the library build to NPM, making it available to apps that want to use it.

This final publish-build step is only used for libraries, not apps, as it makes little sense to deploy the App artifact to NPM. Nobody is going to do npm install @dhis2/maintenance-app in another project. 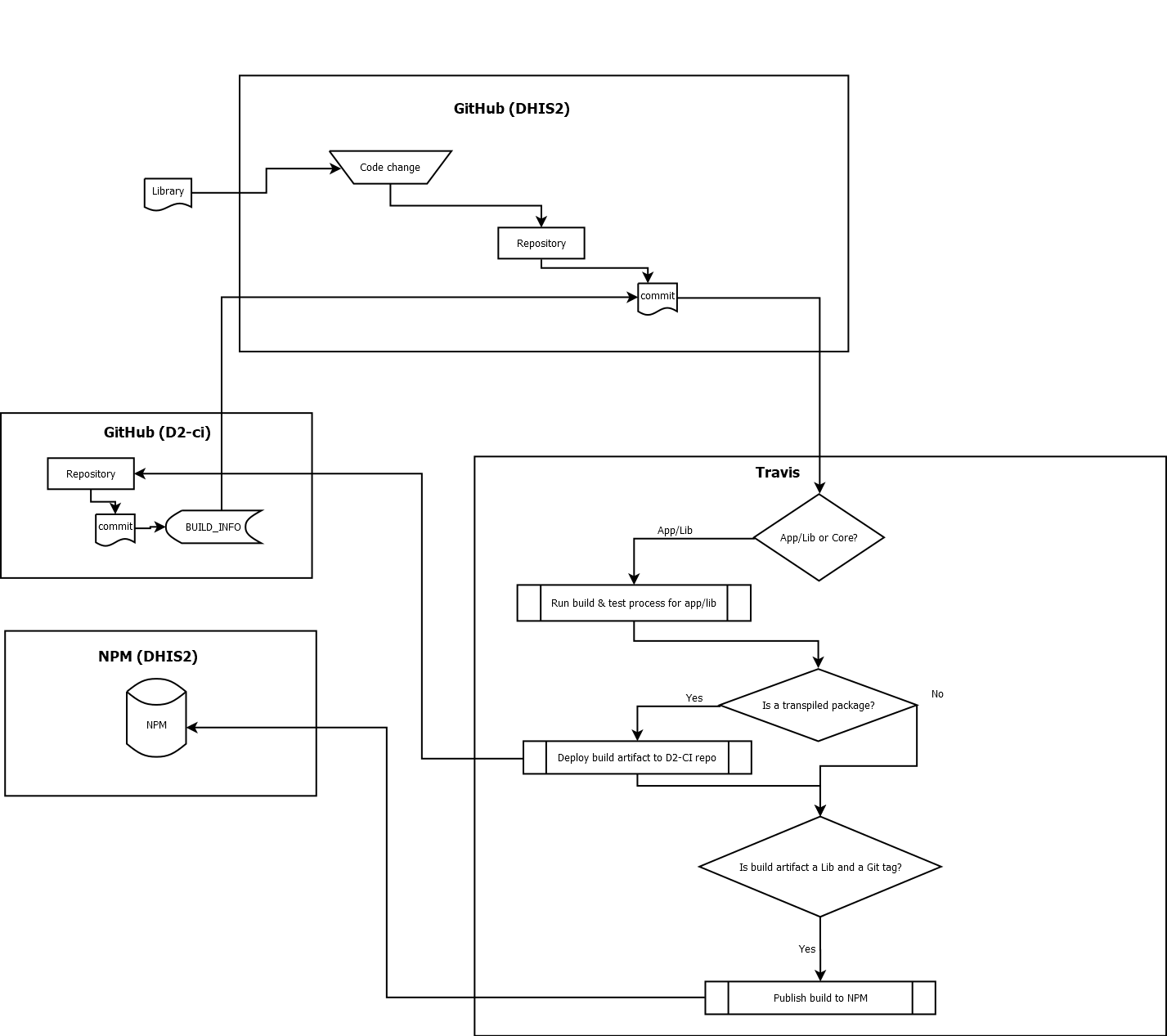 Hold up! Why are transpiled and non-transpiled packages treated differently?#

Additionally we might want to create a single-file build complete with all runtime dependencies. In that case we create a bundle.

This "build artifact" (either the transpiled source, the bundle, or both) is something that we want to store and track, so we can refer back to exact build and not have to recreate it, as that would technically not be the same build.

NodeJS libraries and tools we write typically do not need to be transpiled before we package and release them, as NodeJS is an environment that supports reasonably modern ECMAScript already. At any time we can run and refer to the source code straight from the dhis2 repository, so storing it on d2-ci would be a straight copy, which is waste.

Where are we now?#

Let's take a look at what we have and where we are:

Ok, so our library has been released into the wild. But our front-end application artifact is just sitting there in a build artifact repository. How does it go from there into a DHIS2 build?

First, once Travis indicates that the PR against the dhis2-core is safe to merge, we merge it. It's a new feature so we merge it to the master branch and do not backport to previous versions (branches).

When Jenkins sees a commit on a branch it monitors (e.g., master) it joins the fray. The butler has a job to do, and like any good butler, starts to do it without fuss or ado.

The first step is simple, it does much the same work as Travis did before it, by executing tests and compiling the source code.

The second step is actually internal to the build process, but it is important to visualise. It is to fetch all the application artifacts that are going to be bundled into the WAR-file from the build artifact repositories. The list of applications to bundle, and version thereof, resides in the apps-to-bundle.json file inside of the dhis2-core repository. 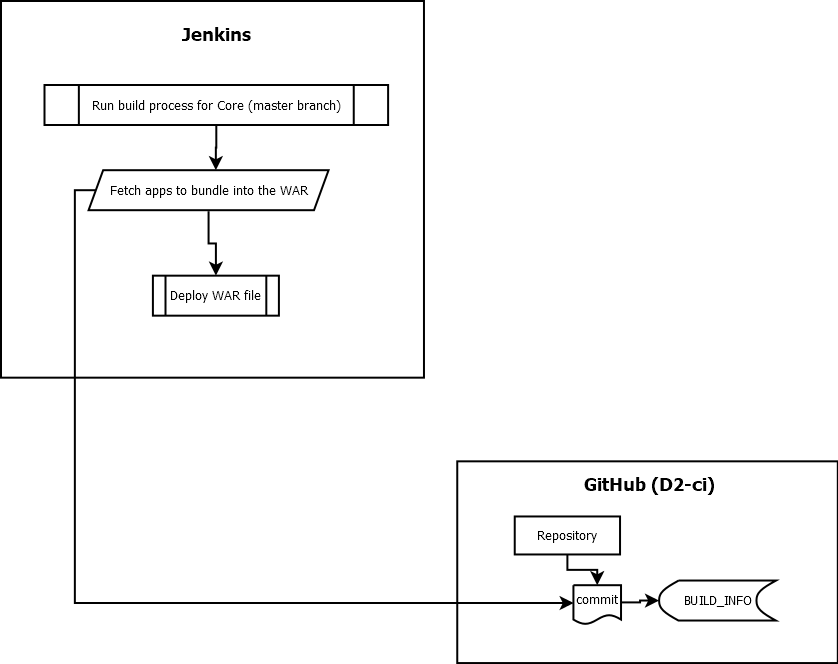 By using the artifacts stored in the build artifact repositories for the official DHIS2 release, we prevent artifacts created on non-sanctioned build environments (e.g., developer's machine) from making their way into production.

The third step is to write a file apps-bundle.son into the bundle that indicates the commitish of each app that was bundled, thereby creating a deterministic build.

Once all the apps have been bundled in the resulting WAR file, the artifact is complete, and now all that remains is the final step: to upload the dhis.war file to Amazon S3.

Note that all builds may be published to Amazon S3, but not all builds are considered an official release.

And here is the full system in a single image. 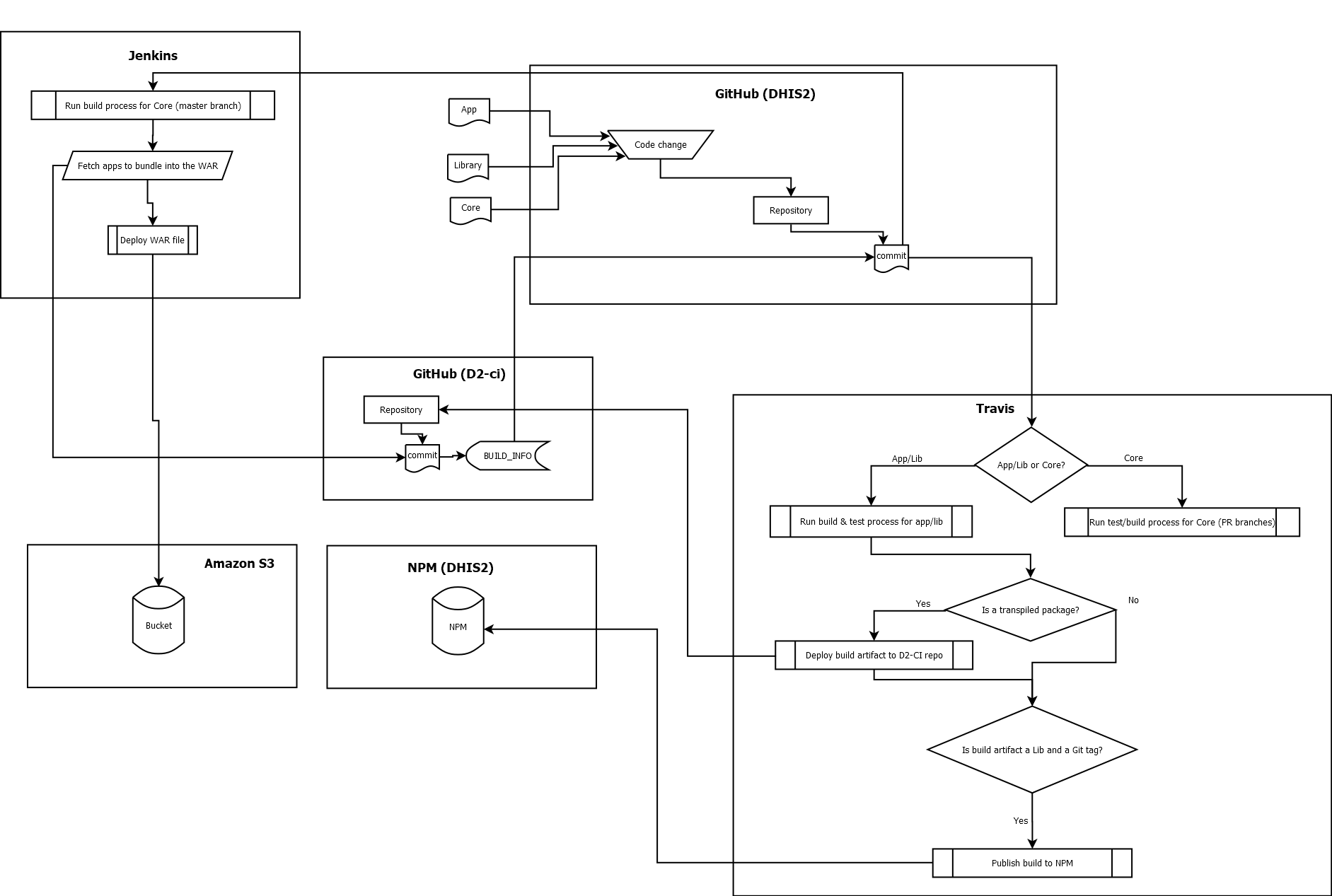 That is a lot of words, boxes, and arrows to keep track of. The question is, what is it all for?

The three most important reasons are these:

And now that you know the theory...

Next up is an article on how to manipulate the build system to pull off some tricks. 💃